Here’s a summary of all the features with screenshots to give you an idea of how each feature looks and works in the game. Most of these features are in both guides but there are definite differences and overall Dugi’s guide does offer more features.

Both Dugi and Zygor have their own addon installer and updater, which are straightforward and easy to use. It makes updates very easy, with a simple click of a button. There’s no real difference between the two guides, the only thing I would note is that Dugi does have a video tutorial on how to use the installer, whereas Zygor has nothing if you were to run into difficulties.

The model viewer is offered by both Dugi and Zygor. This is where you can see a 3D image of an NPC or object for your upcoming quests. Zygor has an adjustable frame for viewing the image, which is handy for making it to whatever size you prefer. Whereas Dugi has a set frame size (see screenshot below). With this feature you can view questgivers for accepting and turning in quests as well as NPCs or objects for quest objectives.  A downside of Zygor’s viewer is that it’s often missing NPCs, whereas Dugi’s NPC list seems far more complete. This is one of my favorite features, especially for finding those hard to spot objects.

This feature is offered by Both Dugi and Zygor, where a customized route can be created for your character. Dugi calls it the taxi system and Zygor’s is called the travel system. They are essentially the same thing and work very similarly. It will automatically create the fastest route for your character to get to a location from your current position. It will also automatically suggest the use of Hearthstone, Teleport spells, Flight masters, Portals, Boats and Zeppelins.

Dugi Guides offers the Guide Suggest Mode and Zygor Guides offers the Smart Injection System (SIS). This feature works pretty much the same in both guides, it just has a different name. It works by automatically putting pre-leveled character in sync with the guide. This includes recruit-A-Friend, heirlooms and dungeon leveling. It will automatically skip quests so you are always questing at the right level.

Dugi Guides also allows you to choose a easy, medium or hard mode, which definitely makes it stand out over Zygors. The easy mode means you will level slower, but is ideal for newbies as there is less chance of dying. Whereas the hard mode is perfect for experienced players who want more of a challenge. This mode gives you more experience and helps you level faster. The default mode is normal, but you can change this within your settings. This is another one of my favorite features. 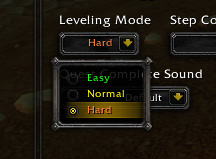 This is only offered by Dugi Guides and is similar to the popular Carbonite addon. It works by having a map preview automatically pop up with each new step to show you where you need to be. This feature is designed to work as a quick reference for navigating your way around. The map is translucent and automatically fades in and fades out. You can choose how long you want it to stay on screen. The maximum time is 2 minutes. You can also completely turn off the feature if you don’t want it.

You can make the map appear by clicking on a quest objective. The default setting shows one quest objective at a time, but you can choose to show more. The map is able to be placed anywhere on screen, so you can choose the best spot, so when it pops up it won’t clutter the game. The screenshot below shows what the map looks with the highlighted quest area. 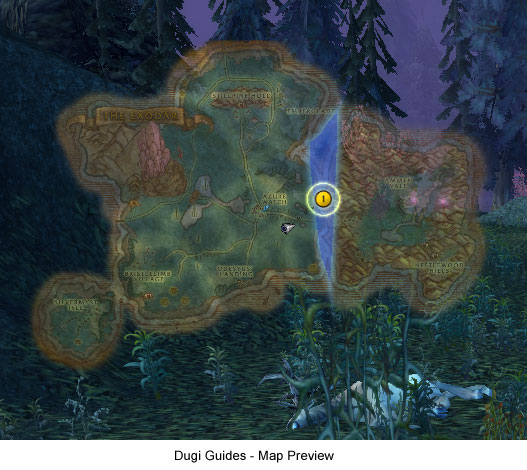 This feature works by targeting an NPC for you to kill or interact with. Zygor Guides calls theirs the ‘magic button’ and Dugi Guides calls it the ‘target button’. It does the same thing, but Dugi’s has more options and can be customized. Zygors works by keybind and just targets the NPC.

Dugi’s works by keybind or by clicking their target button icon (looks like a little marksman). It targets and also places a skull icon over the NPC so you can find them easier. I have some screenshots below to show it in use. The objective is the bloodmyst hatchling, which is a difficult NPC to spot as it blends really well into the background. The first screenshot shows the the NPC image in the model viewer with the marksman icon. I simply click the icon and then it automatically targets the closest bloodmyst hatchling and puts a skull over it. You can see how handy it is having that skull icon pop up, otherwise it’s almost impossible to spot. 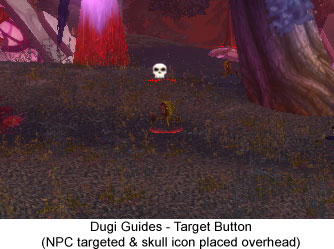 Both Dugi Guides and Zygor have their own built-in waypoint arrow to show you exactly where to go. Dugi’s can be customized to create your own waypoint by clicking on a quest objective to change the waypoint.  Zygor’s waypoint arrow will only point to the current step of guide, so you aren’t able to customize it. Both guides also have an ant trail feature which works on the world map and mini map, which is handy for displaying the route.

Both guides give you 2 options for arrows, so you can choose which look you prefer.

Heres a couple of screenshots of the ant trail feature on the world map. 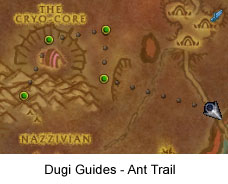 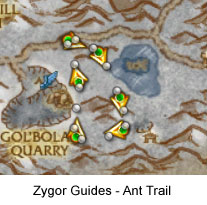 This feature is offered by both Dugi and Zygor guides. It allows you to complete multiple quests at the same time if they are in the same area, so you aren’t wasting any time doing one quest after another. Dugi Guides automatically works with the blizzard objective tracker. Normally the blizzard tracker will just list the quests randomly that you currently have to complete, but with this feature, it will list them in the correct order of which one to complete first, and will only list the quests that are able to be completed in that area. Zygor guides doesn’t use the blizzard tracker, instead they incorporate multiple steps into their guide.

You can choose to have the blizzard objective tracker look like part of Dugi Guides (first screenshot) or just have it look like it does normally in the game (second screenshot), while still getting the benefits of the feature. The third screenshot shows Zygors guide with multiple steps to be completed in the same area. 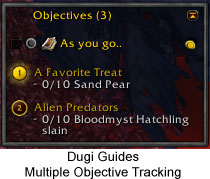 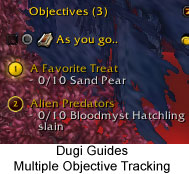 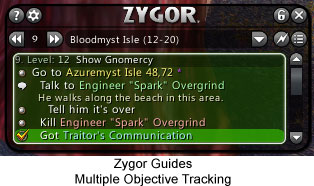 Both Zygor and Dugi have a search feature that allows you to search their guides for specific info. Zygor’s is mainly designed for searching for pets and mounts. It is quite limited for searching the guides as you can only search for the titles of each guide e.g. The Cape of Stranglethorn, but if you wanted to search for a specific quest, it won’t work. Zygor does not offer a sticky frame feature.

I prefer Dugi’s search feature as it allows you to search all the content in every guide. So you could search for “hearth” to find all these locations within your zone, which could then be added as notes to your sticky frame. The search feature and sticky frame work together. The main reason that Dugi added these features, was for his mount and companion guide. Its like a library of all the mounts and companions in the game, so you can search for any mount/companion to find out out where it is, what it looks like (with the model viewer) and then you can add it to your sticky frame as a handy note.

The sticky frame is a separate frame that you can activate if you want to create your own customized list. You can click on any steps within the guide to add them to the sticky frame. For example its useful for adding “as you go” steps where you are told to find or kill things as you go for upcoming quests. Or you may want to add all the flight points or hearth locations. Or maybe you want to come back to a quest, which can be added to your list. It’s just a handy ‘note keeping’ feature, which is easily turned on and off as you need it.

Here’s a screenshot of the search feature. I typed in ‘hearth’ and 4 results showed up for that zone. I then put them into the sticky frame (second screenshot) as notes. 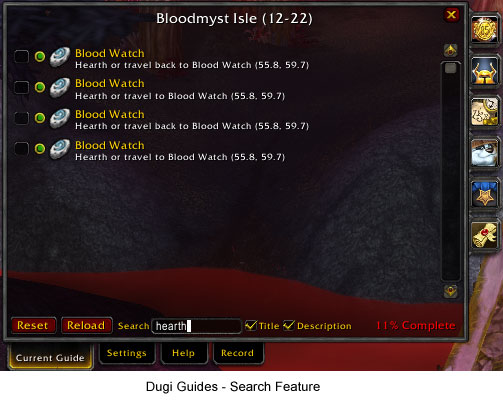 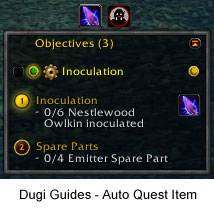 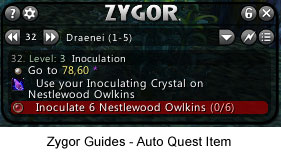 Both Dugi and Zygor guides can be translated into French, German, Russian and Spanish. This feature is limited as it only translates: the quest names, NPC names and zone names. So the descriptions on how to complete quests will still be in English. But you can buy Dugi Guides 100% translated into French.

Hope this site has been helpful.

This site uses Akismet to reduce spam. Learn how your comment data is processed.